The short answer is: YES!

QUESTION: What Did Congress do?
‍ 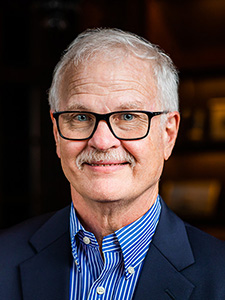 Specifically, Congress changed the cash value accumulation test (“CVAT”) insurance interest rate from a fixed 4% to a floating rate labeled by Congress as the Applicable Accumulation Test Minimum Rate (“AATMR”).  The CVAT interest rate will eventually become the lower of 4% or the AATMR.  Similarly, the Guideline Premium Test (“GPT”) interest rate, previously fixed at 6%, and used for calculating the Guideline Single Premium (“GSP”) was amended to the AATMR plus 2%.  Lastly the fixed 4% rate used for calculating the Guideline Level Premium (“GLP”) was amended to utilize AATMR.

QUESTION: How is the new AATMR calculated?

Simplistically, the AATMR is an insurance interest rate that adjusts.  AATMR adjusts based on the lesser of: (i) a proscribed US valuation interest rate for life insurance with guaranteed durations of more than 20 years (as defined in the NAIC Standard Valuation Law) (the” NAIC Rate”); or (ii) the mid-term Applicable Federal Rate (“Mid-Term AFR”) as defined in IRC 1274(d) (annual compounding) published monthly by the IRS averaged over the sixty (60) month period ending before the second calendar year prior to an adjustment year.  AATMR is adjusted only when there is a change in the NAIC Rate.

For reference, the current January 2021 Mid-Term AFR (annual compounding) rate is .52% and a recent 60-month average Mid-Term AFR Rate would be approximately 1.89% which after required rounding to the nearest whole percentage equals 2% which is currently equal to the 2021 transition rate of 2%.  Additionally, as an example, if an adjustment year is 2023, the 60-month Mid-Term AFR average time frame would end December 31, 2020 and that average as stated is approximately 1.89% rounded to 2%.  If the Mid-Term AFR remains at or near its historically low levels for the next few years, it is quite possible the AATMR in future adjustment year could be based on the Mid-Term AFR (as the lesser rate vs. the NAIC Rate) and it is further possible that the previous 60-month average Mid-Term AFR number could be 1%, which is much lower than the old 7702 rates of 4%.  Such possible low Mid-Term AFR based AATMR would have a further impact on funding flexibility, policy premiums, and CVAT or GPT testing results.

IRC 7702, both before and after the law change, is complicated, is actuarial and tax law driven, and has many nuances (such as material change, changes in death benefit, etc.) which are beyond the scope of this article.  Notwithstanding, as a bit of a refresher on some of the basics of IRC 7702, for a policy to be considered life insurance under the tax rules, the policy must meet one (1) of two tests – CVAT or GPT plus the death benefit is not less that the insured age Applicable Percentage of the cash value corridor of IRC 7702(d) (“Corridor Test”).

The CVAT test is based on proscribed assumptions and the policy cash surrender value (“CSV”) can not exceed the Net Single Premium (“NSP”) calculated and based on applicable guaranteed policy assumptions to fund future benefits under the contract.  A fixed 4% interest rate was previously used to calculate the NSP, and now in 2021 the rate is 2% and thereafter an interest rate of the lesser of the AATMR or 4% will be used in the CVAT test.  CVAT is commonly used in Whole Life policies and often in COLI policies.

The GPT test includes a GSP calculation and a cumulative GLP calculation and the greater amount applies in any given policy year.  GSP is the single premium needed to support future benefits under the life policy utilizing applicable guaranteed mortality charges, reasonable insurance charges and the IRC 7702 proscribed interest rate. Previously an interest rate of 6% was proscribed for GSP.  Under New IRC 7702, the interest rate is AATMR plus 2%.  GLP is the annual premium needed to support the death benefit under similar assumptions as GSP, but the old interest rate of 4% has dropped to the 2% transition rate in 2021 and the AATMR thereafter.  UL policies often use GPT testing so as more premium can be paid into the policy sooner than under CVAT testing.

The New IRC 7702 rules do not directly amend the IRC 7702A rules adopted by Congress in 1986 – commonly referred to as the Seven (7) pay rules, which, for income tax purposes, classify a life policy as MEC or Non-MEC.  However, the use of the term Net Single Premium (NSP) defined in IRC 7702 and referenced in the Seven (7) pay rules implies the interest rate change under New IRC 7702 should apply to the Seven (7) pay rules of IRC 7702A as well.  Future clarification may be necessary on that question.  Classification as a Non MEC results when the seven (7) annual level premiums support the death benefit under applicable guaranteed mortality rates and the applicable guaranteed interest rate.

QUESTION: What is an ‘adjustment year?'

QUESTION: What is a ‘transition year?'

QUESTION: What is the impact on existing policies?

So, what does all of this mean? (examples)

A. Impact on PPLI policies as to maximum premiums allowed or minimum death benefit required in a PPLI policy

The death benefit required under a typical PPLI plan design based on a given amount of premium will be reduced in some cases rather dramatically.  The tables below at ages 40 and 60 may best demonstrate the impact New IRC 7702 utilizing a typical PPLI VUL policy design.
‍ 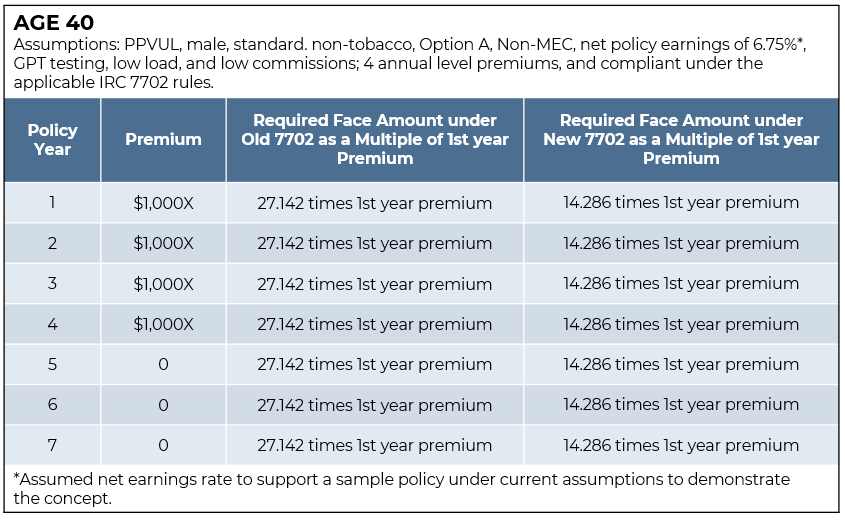 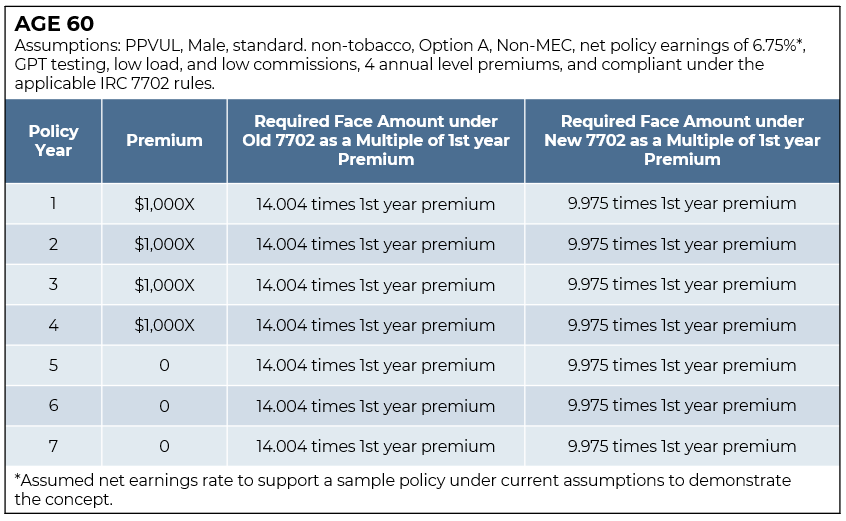 The greatest impact of New IRC 7702 interest rule changes for coverage-oriented products is in the area of funding flexibility.  As to retail policies, with policy owners relying heavily on excess interest to fund future (Whole Life) premiums or (Universal Life) premiums and policy COI charges, there had been a narrow opportunity for pre-funding a Whole Life or a Universal Life plan, while remaining below the Seven (7) pay MEC limitations.  In other words, if a policy owner client had twin goals of paying up his or her contract with seven equal premiums, often during the client’s higher earning pre-retirement years, coupled with the goal that the contract be a Non-MEC, there was a fair chance that the Seven (7) pay MEC premium limitation would not carry the policy to maturity and the policy could lapse.  This was especially true for Universal Life policies when combined with the current environment of persistently low interest rates and low treasury yields.

Under New IRC 7702 in the case of Participating Whole Life, there is much more flexibility to increase the use of paid-up riders to fund future premium payments without violating MEC limitations.  In the case of fixed Universal Life, a policy owner can pay in more premium per dollar of death benefit.  There is more freedom to design premium payments that fit the client’s needs, as well as a higher likelihood that Seven (7) pay MEC premiums will actually carry the policy to maturity. The following table illustrates the impact of New IRC 7702 as to Seven (7) pay premiums:
‍ 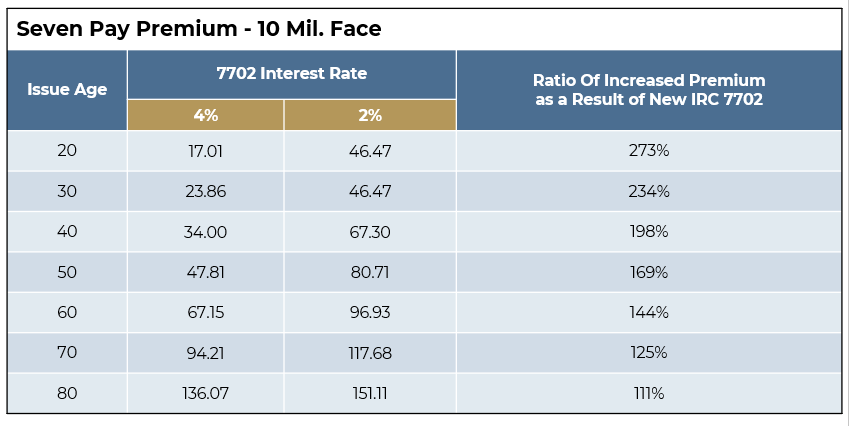 Note that for younger ages, the 2% Seven (7) Pay premiums are almost 3 times the 4% premiums for a Whole Life to age 121 policy. The effects grade down as age increases, but still provides additional funding flexibility.

While the above has focused on the ability to fund contracts without violating MEC limitations, the increased funding flexibility continues past the initial seven years of the contract. The new, higher Guideline Premiums will allow for funding levels greater than what were previously available.  This has the positive effect of allowing policy owners to “overfund” their Universal Life policies – not only assuring the continuation of the death benefit, but with excess interest credits – allowing for greater accumulation of policy values.
‍

In conclusion, the New IRC 7702 rates will have a dramatic positive impact on life insurance purchasers, carriers, and the life insurance industry.
‍

Thank you! Your submission has been received!

Oops! Something went wrong while submitting the form